You may not have heard of fashion designer David Meister. He’s one of those behind-the-scenes people who make the glittery stars look so glittery and beautiful on the red carpet and elsewhere. But if you like clothing and you like celebrities, you may have heard of him. And he just so happens to be from Cincinnati.

After graduating from the University of Cincinnati’s Design, Architecture, Art, and Planning college, Meister left Cincinnati and headed for fashion stardom – with a few bumps and bruises along the way. Whether it was helping Joan Rivers hilariously rate some celebrities outfits on TV or talking fashion with various talk show hosts, Meister has made his mark. It seems just about every woman in Hollywood has, at one time or another, worn Meister’s gowns: Julia Louis-Dreyfus, Jane Seymour, Jane Fonda, Pamela Anderson, Tina Few, Sofia Vergara and Demi Lavato – to name a few. Or his very first star to wear clothing he designed – Sharon Stone, whom he still considers a friend to this day – this guy has seen and done a lot in the world of fashion. And he doesn’t like taco socks, as Joe finds out.

Meister grew up in Colerain Township and that’s pretty fascinating to host Joe Wessels – because so did he. On the same street. Directly across the street from David Meister, his parents and two brothers. But the two had never met before and Joe had no idea David was David – until he started Googling Cincinnati famous people. So, they had a great get-to-know-you conversation with lots of laughs and Cincinnati talk and learning David used to play with Joe’s uncles. It was a fun conversation.

Also thank you to B. Shields for allowing us to use his great song “Cincinnati” on the show today. Check him and his tunes out. A true local original.

Enjoy the show! And be sure to check out From Cincinnati so you can rate our show and leave a comment or ask a question. Thank you for listening. 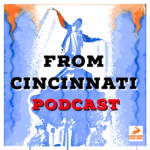