LOVELAND, Ohio — There’s one person on the ballot this fall who isn’t really too worried about how many votes he will need. And he’s a guest on the inaugural “Coffee with the Candidate” podcast.

Kevin Dougherty, an appointed incumbent Loveland City School District school board member, was sworn in May 2020. He took the seat of longtime school board member and former school board president Art Jarvis. Jarvis resigned in the wake of a second school levy failure and amidst widespread community angst over the board’s direction. No one else filed to run against Dougherty before the early August deadline, and who, under Ohio law, must run for the seat at the next general election after being appointed. That contest will happen on Tuesday, November 2. 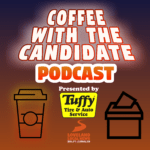 Coffee with the Candidate
Coffee with incumbent Kevin Dougherty, Loveland school board candidate

Dougherty is retired from Cincinnati-based Kroger Company, the nation’s largest retail grocer, retiring in 2017 as the chief digital officer. He worked on projects including ClickList and online delivery, among other tech-related projects for the company.

He lives in Symmes Township with his wife, Barbara. He spoke to Loveland Local News for nearly 40 minutes on issues from his running unopposed to how long he takes to prepare for each school board meeting (it’s a lot), plus how to rebuild the school district’s standing in the community after the two levy failures – including a 16.8-mill levy that was defeated by more than 80 percent of voters.

Kevin Dougherty sat down with Loveland Local News Editor Joe Wessels on Friday, September 17, 2021, at Tony’s on Montgomery Road. The wide-ranging interview covered nearly all of the standard questions being asked of all school board candidates through this podcast but also covered other topics, including how he wound up on the school board in the first place – and just how in the world he wound up all alone, running against no one. While meanwhile fellow appointee, Eric Schwetschenau, wound up in a field race with eight candidates.

Be sure to subscribe to the show in your favorite podcast app and rate and review it so others can find it before Election Day. And don’t forget: voter registration ends on October 4, 2021, in Ohio; early voting begins on October 5, and the actual polls are open from 6:30 a.m. until 7:30 p.m. on November 2.

Thank you for listening!