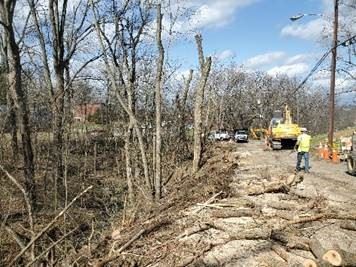 LOVELAND, Ohio — Several infrastructure projects in Loveland will begin work in the spring and summer of 2021, with an estimated total construction cost of $4,214,115 of which 63% of the funding comes from outside sources.

“These projects represent an impressive and necessary investment in the city’s infrastructure. Kudos to staff in finding multiple outside grant sources to keep the city’s costs as low as possible,” said Mayor Kathy Bailey. “The city will do all it can to minimize disruption to the community during these various projects, but we do ask for your patience as not all inconveniences can be eliminated.”

Broadway Street Stabilization
For multiple years, the city has monitored hillside movement along Broadway Street near its intersection with Hanna Avenue. To correct this, a drilled pier wall and guardrail will be installed. The project also will include culvert replacement across Hanna near Broadway, as well as storm sewer improvements. JTM Smith Construction was awarded the project and began work on March 22. The total cost of the project is $413,900 with 50% of the project funded through a state grant and 50% through a zero-interest state loan. The work is requiring the temporary closure of Broadway with a detour route of Williams Street – Oak Street – Hanna Avenue through June.

Miamiview Culvert Replacement
Bids are currently being accepted for the replacement of a collapsed culvert that will take place near Miamiview Drive. The project will include an extension of the dead-end roadway on lower Miamiview. This extension will cross over the replaced culvert and end with a T-type turn-around. The estimated project cost is $417,000. The project is funded through a zero-interest state loan. Construction will take place in summer/fall 2021.

Annual Paving Program
Each year, the City of Loveland conducts a road paving program while school is out between June and August. The 2021 contract was awarded to the JK Meurer Corp. This year’s plans include repaving portions of State Route 48, which will require overnight labor. Staff is still evaluating all roads that will be part of the 2021 paving program. The total funds to be expended on this year’s program is $1,049,750, which represents the largest amount ever dedicated to the road program.

Main Street and Chestnut Street Improvements
This is a large, multi-street project that will take place this summer. The scope of work includes replacing cast-iron water mains, improving storm sewer drainage, and repaving Main Street, Chestnut Street, South Wall Street and Hill Street. The traffic signals at South Wall/ West Loveland Avenue will be replaced in their entirety. The traffic signals at South Wall/West Loveland and Main/Loveland-Madeira Road also will be upgraded to detect vehicles by radar as well as have GPS pre-emption for emergency vehicles. The total cost of this major project is $1,132,900 with the project being funded through the combination of a zero-interest state loan and grant, both accounting for 50% of the project costs.

State Route 48 and Butterworth Road Sewer Extension
A new sanitary sewer will be extended along State Route 48 from Kipp Lane to Butterworth Road, and along Butterworth to just south of Brandywine Lane. The sewer will serve the new Chimney Ridge subdivision, which is the site of the 2022 Homearama. The project is currently out for bid with an engineer’s estimate of $411,695. The city will be reimbursed for the construction cost with an assessment placed on the 30 homes being constructed within the Chimney Ridge subdivision.

West Loveland Avenue Bridge Improvement
The Ohio Public Works Commission awarded the City of Loveland and Hamilton County a grant to replace the deteriorated sidewalks, railings/walls and supports on the north side of the West Loveland Avenue bridge. The city is contributing funds to upgrade decorative railings and light poles to match streetscaping in the downtown area. The total project cost is $693,998. Funding includes a grant in the amount of $277,598, Hamilton County funding of $347,000, and city funding of $69,400. Construction is estimated to begin as early as July.

Loveland Heights Water Main Valve Installation
Water main improvements will be made in Loveland Heights this summer with the replacement of several water valves. Properly operating water valves are an important part of a water system as they allow for the isolation of the water main during repairs. Being able to isolate a water leak results in fewer homes being without water service. This is the second of a two-phase project to replace all of the non-functioning water valves in Loveland Heights. The total cost of the project is $75,000 with the entire amount being covered through a Community Development Block Grant received by the city. The staff is currently evaluating plans and dates for the project.

Lever Park Court Resurfacing
The tennis and basketball courts at Lever Park off Heidelberg Drive and West Loveland Avenue will be resurfaced. Striping for pickleball will be added to the tennis courts. The lowest bid received for the work is $19,872. Work is scheduled to begin in May.

“We are very pleased to be starting a year of significant infrastructure improvements, and I am proud of city staff for being able to secure many outside funding sources and returning our residents’ tax dollars toward projects here in Loveland,” said City Manager David Kennedy.

For more information about these projects and funding, click here. For questions, please contact City Engineer Cindy Klopfenstein at (513) 683-0150.